Wow, look at what the team at Gravetye Manor were awarded at last nights annual AA awards! 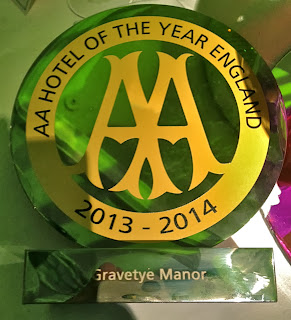 As well as winning AA hotel of the year for England, Gravetye Manor was also awarded 4 red star status.  Red star properties are those that are singled out by AA inspectors as being the best in category.

Crawley Studios worked with Jeremy and Elizabeth Hosking who took over the hotel in 2010.  We worked with the them during this renovation to keep the original spirit of the house and garden.  We were responsible for project managing the major refurbishment of the house and garden, updating the infrastructure of the building.  There have been new facilities put in place internally to meet the demands of the guests.

Well done to all the team at the hotel, we love the fact that with in this beautiful setting the hotel puts service first, it's very easy to forget what it's like to be looked after by such attentive staff.  Looks like our hard work there is paying off!